Is there be a silver lining for the New Europe property markets? 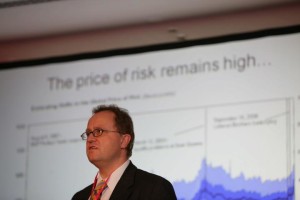 Cash will be king and quality will ride high for investors in the new market conditions was the over-riding message at the CEE Insight Forum TROPICAL STORM insight summit held in Budapest just a month after the collapse of Lehmann Brothers and the onset of the global economic crisis − and the day the Hungarian economy collapsed.

The event, announced earlier in the year before any overt signs of trouble and on the heals of CEE Insight Forum’s ‘CEE Retail Revolution’ the previous autumn at which the possible impact of the US sub-prime crisis was discussed, had been conceived in partnership with the IMF and Financial Times, with IMF’s regional head Christoph Rosenberg leading the cast of speakers. What happened next has gone down in history. 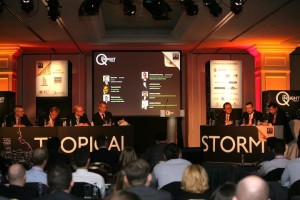 Attended by more than 120 of the sector’s top financiers, investors, developers and consultants convened against the backdrop of a hike in local interest rates to stave off a collapse of the Hungarian forent. However, during the first session of the debate in which Rosenberg delivered the keynote and involved FT’s Thomas Escritt on the panel, both had to exit as it was announced the forent had collapsed.

Rosenberg had given warning of a significant pull against continued growth in the CEE economies where a closer link exists between fiscal instruments and the real economy, coupled with the “external shocks” in commodity and energy prices, which “will put the emerging European economies to the test” and further expose countries with high levels of borrowing and foreign direct investment. Countries like Poland, he said, with more domestically driven economies, are likely to experience a softer landing, but “it will be a huge challenge for some of the more exposed markets like the Baltic States, Hungary, and Czech Republic to engineer a soft landing.” 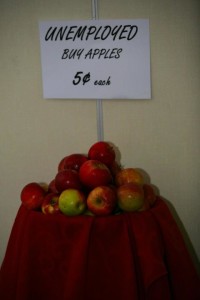 He also highlighted the importance of a global focus on restoring the functioning of the financial markets, but that this must be supplemented by attention to the future regulation and supervision of the financial sector.

Markus Leininger of Eurohypo, Walter Hampel of Hypo Real Estate Group and Matthias Sandfort of Helaba all agreed that “the shop is closed” for new development finance until at least spring 2009 as it will take time for interbank trust to return following the recent shoring up strategy adopted by governments. Leininger said there is no choice, the banks are in intensive care, while Hampel foresees a total shift in lending terms in the medium term with simpler loan structures, higher costs on shorter term agreements and an end to single bank financing of loans greater than €200m. There will also likely be a significant shift from debt to equity finance in the foreseeable future. 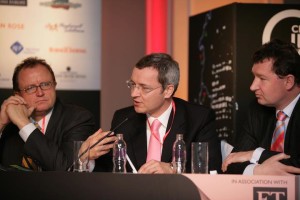 Timo Tschammler of DTZ and Daniel Harris of investor MGPA both offered arguments for a “flight to quality” as investors target the highest grade assets in a “buyers market”, yields move out, supply drops significantly and vacancy rates soar.

Discussion by the panel of senior market players centred around the challenges for developers in the downturn amid turmoil in commodity and labour prices as well as the financial crisis.