End of the ride?

What has been – at least in some respects – an unusual investment cycle now seems overextended and may be near its peak. Expect a soft landing, rather than a hard crash once the cycle has topped out. 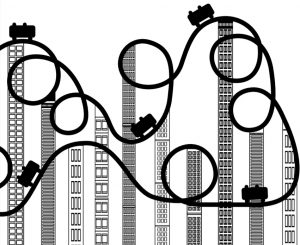 The property markets of Central and Eastern Europe have seen total annual transaction volumes increase steadily in recent years with an all-time high likely to be recorded in 2019. What should the markets be braced for afterwards? Real estate and economic experts claim that while the climax of the current cycle is clearly in sight, no big tremors of the kind that were felt a decade ago when the previous boom ended in a spectacular bust are to be expected this time round.

According to agency data, the total value of transactions closed in the CEE-6 investment markets – Poland, the Czech Republic, Hungary, Bulgaria, Romania and Slovakia – last year reached a record €13.1 billion. Analysts are saying that sentiment indicators in the region are pointing towards a further expansion in investment volumes in 2018. They also argue that the cycle is likely to top out next year. Signs that the peak may be near include rental rate growth in the office sector, which indicates vibrant economic activity, and indications that there could be a development boom in CEE-6 over the next two years. The previous development boom, seen in the years 2007-2008, ended as the global financial crisis broke out. Developers tend to become hyper active toward the top of a cycle as they hurry to deliver product for investors, experts explain.

There are symptoms suggesting that this mechanism is now underway – witness the rising construction costs in Warsaw and Budapest. Last but not least, the increased investor interest in hotel properties could signal a peak in the current cycle. Hotel investment volumes in the CEE-6 region more than doubled in 2017 and reached the level of some €988 million. 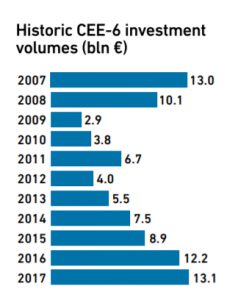 Feedback to the quarterly RICS Global Commercial Property Monitor suggests that an increasing number of respondents see the CEE market as being near or in the peak phase. “Interestingly, however, we are not getting a sense of significant concern over valuations at this point, which we would normally expect to see as the cycle begins to look overextended,” revealed Simon Rubinsohn, the chief economist at RICS.

Indeed, most forward-looking indicators from the organisation’s publication point toward both the investor and occupier markets remaining in good shape at least throughout the course of the current year. And how could the real estate environment shape up in 2019? According to Rubinsohn, while it is questionable whether the macro-economic backdrop can remain equally favourable, “the factors that have typically brought both economic and property cycles to an end seem less present in the current environment.”

This, at the very least, “raises the possibility of a softer landing for markets than might typically be expected,” Rubinsohn argued. Of a similar opinion was Walter Hampel, head of real estate finance CEE at pbb. “The end of the current real estate cycle will be driven by the end of the low interest rate environment. According to most experts, this is still at least a year or two away,” he said. However, he added that political and liquidity risks in CEE also need to be taken into account.

Born out of the turmoil caused by one of the most serious economic crises in decades, the current cycle has been an unusual one. On the one hand, new lending regulation in the major Western economies has meant less cash available for real estate development and investment. Globally, transaction volumes have been lower than they would arguably have been without the post-crisis lending restrictions. On the other hand, however, a wave of monetary stimulus has been providing important support. 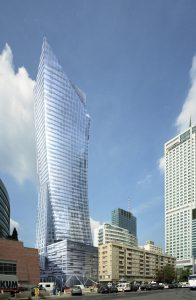 The combination of an extended period of ultra-low interest rates and quantitative easing has been instrumental in driving the current cycle, Rubinsohn argued. Low rates, Hampel pointed out, make bond markets unattractive and stock markets seem fully priced to many investors. “Real estate investments are therefore comparatively attractive, which leads to a lot of capital seeking exposure to real estate as an asset class for investment. CEE is only part of this bigger trend,” he maintained.

Inflation has not manifested itself in the way it did previously. “This has provided a comfort blanket for investors who have felt more emboldened in squeezing yields on real estate, while spreads remain wider than in the past,” Rubinsohn said. Foreign institutions have played a role in driving investment activity in CEE as they have sought to increase their involvement in the market. The region has been awash with funds coming from new directions, including Asia, the Middle East and South Africa.

Admittedly, Asian and South African investment volumes in CEE last year decreased compared to 2016, but they still reached the healthy levels of €1.4 billion and €1.8 billion respectively, according to Colliers International data. Significantly, CEE (including both domestic and cross-border) capital put up an impressive performance in 2017. It accounted for investment transactions valued at a total of €3.3 billion, which marks a 32-percent increase y/y.

Savills data show that whereas in 2007 investors from the Asia Pacific and Middle East and Africa regions accounted for transactions in Poland valued at €232 million and €210 million respectively, last year the volumes were already at €1.082 billion and €502 million. The percentage share of European capital in the transaction volume in Poland has been decreasing steadily, with investors from other continents increasingly interested in property in the country.

A rise in demand for non-core assets including hotels has also been a feature of the investment market in the region of late. “We would not jump to the conclusion that this is a sign of speculative excess, but it justifies close monitoring,” Rubinsohn claimed. Factors such as the decreasing premium for risk related to investment in commercial real estate have led investors to look for alternative assets that will be more immune to cyclical fluctuations, explained Michał Stępień, an associate in the investment department of Savills.

Apart from hotels, alternatives to the traditional real estate asset classes of office, retail and logistics now include student housing, nursing homes, medical centres, rental apartments, data centres and infrastructural projects. In Poland, for one, this trend was last year evidenced by Catella Real Estate’s acquisition of a package of luxury apartments in Warsaw’s Złota 44 skyscraper. In total, some €29 million was invested in institutionalised rental property in the country in 2017.

Central and Eastern Europe – and Poland, as the region’s biggest investment market, in particular – continues to attract foreign investors aiming at geographical diversification of their portfolios. Relatively high yields are a major incentive. They provide a sort of compensation for the low yields on investment found in the leading markets of Western Europe. For their part, historically low rents allow one to hope for a rise in property values in the long-term.

Indeed, in the opinion of Stępień, low rents are the main feature distinguishing the current market situation from that seen in the pre-crisis years when yields reached record-low levels and rental rates were the highest in history. Besides, even though ten years have already passed since the outbreak of the global crisis of 2007-2008, commercial real estate investment volumes in Poland have only recently reached levels that are comparable with the level recorded in 2006.

Meanwhile, over the last decade the stocks of existing space in each commercial property sector in the country have grown by approximately 100 percent. This means that the last few years have not been defined by what could be described as frenetic investment activity. “It seems that the latest financial crisis has taught real estate market players to be very cautious and one should only expect minor corrections, rather than the burst of a speculative bubble in the coming years,” Stępień concluded.