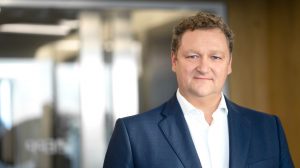 The sector’s garland award for Lifetime Achievement in Real Estate was presented to Hadley Dean of MDC² at the 2022 CEEQA Gala, joining a select band of real estate leaders and entrepreneurial empire builders of regional and global stature to be recognised for their significant and durable contribution to the sector.

Dean, who has managed extensive business interests in Ukrainian real estate during his more than two decades in CEE as CEO East Europe of Colliers International, is widely recognised as an outstanding builder and motivator of teams throughout his career and as one of the sector’s longest standing and most influential operators. Congratulations Hadley Dean

The CEEQA award for Lifetime Achievement in Real Estate is the highlight award of the year, given to an inspirational leader who has made a transformative and durable contribution to the “New Europe” property sector in their own right.

Recognised as the industry’s highest accolade and the highlight award of the year among a total of 23 awards presented for the best buildings, companies and industry professionals of the year in Central & Eastern Europe and Southeast Europe, it is the only award to be announced in advance of the CEEQA Gala, and is chosen each year by the organiser in consultation with the CEEQA Jury.

As a motivator, team builder, thought leader and ring master the recipient of this year’s CEEQA Lifetime Achievement in Real Estate award has had few peers in the CEE, SEE and wider East European real estate markets over the past 20 years. The highlight award of the sector year is presented at the CEEQA Gala.

We are delighted and honoured to welcome Hadley as its most recent recipient, joining a select band of real estate leaders and entrepreneurial empire builders of global and regional stature to be presented with the award.

Past winners of the award have included illustrious industry figures such as Eugene Golub of Golub & Co, Cor Zadelhoff of DTZ, Carl Panattoni of Panattoni, Otto Werner of ECE Projektmanagement, Sandor Demjan of Trigranit, Paul Gheysens of Ghelamco and Gordon Black of Heitman, as well as locally born leaders David Mitzner of Apollo Rida, Radim Passer of Passerinvest Group and Pawel Debowski of Dentons.

Hadley has been successfully operating in Poland for over 20 years where he is recognised for growing businesses and consistently outperforming the market place.

For more information about previous winners of the award see below.