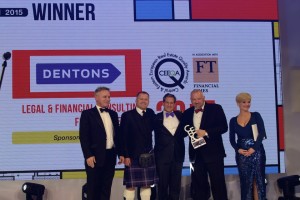 But it was international real estate advisors CBRE that shone brightest, capping a successful year in the New Europe property markets with their first CEEQA awards since 2009, scoring a hat trick of awards in the Office Agency, Capital Markets and Property Management categories. The agency, which until recently had been widely perceived to be underperforming in the sector relative to its global status, has enjoyed a surge of success in the key Poland market while continuing to build on its solid platform in other markets.

The 2015 edition of the sector’s most valued awards also saw a notable trend towards local success stories, with first time wins for Slovakian born HB Reavis in the Developer of the Year category as well as a double success for Polish developer Griffin Real Estate in the Rising Star category and overall Company of the Year categories, while Monika Rajska-Wolinska of Colliers International became the second woman to lift the Industry Professional of the Year title.

Success for industrial developer P3 Logistic Parks in the Investor of the Year category reflected a growing incidence of developers turning investors, particularly in the industrial segment, driven by a recent surge in international capital demand seeking local partners and platforms to gain market share, a good sign for the sector.