HomeNewsNot much downside in ‘wall of capital’ for New Europe markets

Not much downside in ‘wall of capital’ for New Europe markets

The Wall of Capital – What does it mean for the New Europe property markets?

Following the CEEQA New Europe breakfast mixer in Cannes, delegates at the 2015 edition of CEEQA@Mipim were privileged to hear the insights of Matthew Richards and Robert Stassen, leaders of the JLL Global Capital Markets & European Research teams, on the causes, effects and likely impact of the much vaunted ‘wall’ of international capital targeting European commercial real estate, including the attractions of the Central & Eastern Europe markets. The keynote was followed by an intensive panel discussion on the issues raised involving some of the New Europe property sectors most experienced investors, developers, banks and consultants (see below). 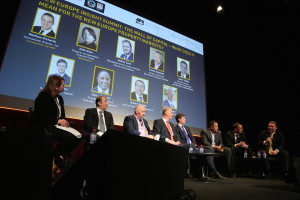 Chief among a range of triggers, they argued, had been the response of the US public pensions system to the global financial crisis in 2008 and, most notably, the bankruptcy of the city of Detroit in 2011 caused primarily by over exposure to the muted returns of its public pension funds to public equities and bonds during the ensuing economic downturn.

This, coupled with the increasing availability of big data on real estate markets providing the greater transparency and fiduciary reportability, even in less mature markets, paved the way for public pensions to rebalance and reallocate a significant portion of their fund capital to alternative asset classes including real estate. Capital from insurance companies and endowment funds had also since joined the fray and, where in 2007 insurance companies were net sellers of real estate, by 2014 they become net buyers.

The same big data effect, in stimulating a diversification away from concentration on a few key traditional investment city locations and towards developing markets as well as new segments like healthcare, is seeing an equal proportion of investment from outside Europe — around 40% of all investment in 2014 — coming into the CEE markets, primarily through private equity funds and capital partnering, looking for outsized returns partly to justify the cost of overseas investment as well as to rebalance their portfolio risk. This money has more long-sighted goals that traditional asset trading money, which could both lengthen the current cycle while bedding in long term benefits for the sector.

For a full report on this panel visit our Wall of Capital Insight Summit page.