The eleventh recipient of our highlight award for Lifetime Achievement in Real Estate is founder and president of leading international real estate developer Ghelamco, Paul Gheysens. The award is in recognition of his outstanding services to the European real estate sector and his company’s extensive, award winning achievements in the Central & Eastern European market place.

Gheysen’s initial plans to become a veterinarian were curtailed by his personal reaction to the sight of blood and in the late 70s he channeled his attentions to designing gardens and building public areas. This lead eventually to the designing of buildings and the establishment in 1985 of a company that was to become the largest private investment and development holding in Belgium, Ghelamco. 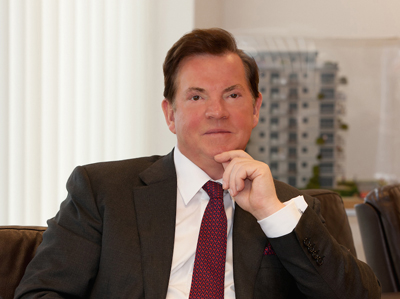 The vision of Gheysens led the company through many successes including expansion into Central Europe and Russia, as well as the recent completion of the Ghelamco Arena multi-functional stadium in Ghent which has been awarded for its interior design and was chosen from 18 competitors as the best stadium worldwide delivered in 2013. Entry into the Central & Eastern European markets in 1991 was a further growth step for the company which paid significant dividends over time, the company becoming one of the largest developers of class A office buildings in the rapid rise of Poland’s economy following the collapse of Communism, delivering award winning buildings which to date total more than 1m square metres of which more than 1.2bn EUR in value has been sold on the institutional real estate capital markets. In 2006 Ghelamco also entered the Russia and Ukraine markets with successful logistics projects.

In terms of the present impact of the company, during the past year the company has completed two major office projects in Warsaw and continues work on its flagship project in central Warsaw, the Warsaw Spire which will be delivered in 2015. Awarded for the “Best Architectural Design in Poland” in 2011 when it was launched, the complex includes a 180-metre high, 44-level tower building (48 levels) and 2 lower buildings, each of 55 metres in height (15 levels) which will together provide approximately 100,000 sqm of office space equipped with the latest technical and environmental solutions having already obtained BREEAM Excellent certification. The project will include unique urban spaces that are accessible to all Warsaw residents including a vast patio inside the complex – the first of its kind to be incorporated into an office complex of this scale – and also an area filled with carefully designed greenery, elements of small architecture, fountains, leisure amenities and even an amphitheatre. The ground floors of the buildings will all be dedicated to restaurants, coffee shops, boutiques and services, etc, providing a lively lifestyle destination area day and night as well as a modern urban working environment with excellent transport access links.

Apart from commercial success Ghelamco is also a pioneer and trendsetter in sustainable construction with the largest number of BREEAM certified buildings in the entire CEE. Corporate Social Responsibility has been a vital personal goal for Gheysens for many years and as through his family as well as his company he has generally supported the causes of sick and poor children, young talent in classical music and also local community events.

“This award from CEEQA and the Financial Times is an honour not just for me but also for the team that has built Ghelamco, and for all our partners who have made our dreams possible. We look forward to pursuing many more dreams together.”

“We’re delighted and honoured to present this award to Mr Gheysens, who has led by example as an innovator and driver of new ideas, and has consistently pursued a clear vision and set extraordinarily high standards for the sector within the CEE arena and wider afield.”