Brian Patterson, Managing Partner of AIG/Lincoln, has been announced as the recipient of this year’s CEEQA Lifetime Achievement Award sponsored by the Financial Times.

The award, which is presented each year to a leading industry figure for significant and durable contribution to the commercial real estate sector in central & eastern Europe, is in recognition of his role since the company was founded in 1997 in helping to lead the company to a position of leadership in the CEE marketplace where it has participated in many of the sector’s landmark commercial real estate projects. The award will be presented at this year’s CEEQA Gala on on 23rd April in Warsaw.

Brian started exploring business opportunities in Poland in 1992 and initially led the developments of Warsaw Distribution Center (WDC) and Diamond Business Park (DBP), in Warsaw, two of the first few modern commercial projects realized after the dramatic changes to a market democracy. In 1997, he became a founding partner of AIG/Lincoln, a joint venture with American International Group and Lincoln Property Company. AIG/Lincoln, through local partners in each market, has successfully developed and managed projects in Poland, Russia, Czech, Hungary, Romania, Slovakia, Germany, Italy, Bulgaria and Spain. 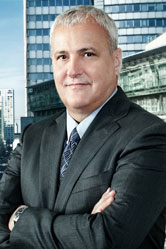 Before AIG/Lincoln, in addition to the WDC and DBP projects, he started other companies as well, including Archive Management Solutions (AMS) with partner Tom Keller, a business-to-business service provider specializing in records management – the storage, management and protection of physical and digital data for companies. AMS was sold to Iron Mountain, the world-wide industry leader in records management, in 2011. Brian and Tom are still partners with Iron Mountain in Russia, Ukraine and Denmark.

AIG/Lincoln has been somewhat unique in the property development space, being one of the few and perhaps the only developer to build 5 product types, including office, shopping center, warehouse, entertainment and residential projects. Since entering Europe, most of the focus has been on the faster growing CEE markets. The company’s philosophy is to create teams in each market. Iron Mountain is one of the largest warehouse occupiers in the region. AIG/Lincoln is also one of the largest property management companies in the region with 60 projects and more than 1.6 m2 currently under management.

“I very much appreciate that my friends and peers believe that I deserve this award. I am somewhat uncomfortable with receiving this award as an individual as there are so many people that have been involved in creating AIG/Lincoln’s business units and its projects over the years. However, I am pleased to accept this award in the name of my partners who have also led the development of these projects, including especially Lance Bozman in Hungary, Walter Dackiw in Czech Republic, Mirek Szydelski in Poland and Dariusz Dworakowski in Russia” – said Brian Patterson, Managing Partner, AIG/Lincoln.

“On behalf of CEEQA and the Financial Times, as well as the CEEQA Jury and all our partners, I am delighted Brian has accepted to attend this year’s CEEQA Gala to receive our annual award for Lifetime Achievement in Real Estate. Few people, if any, have matched his dynamism and brought so much value into the market place across this sector and other sectors, over a sustained period. We congratulate him for his past achievements, while recognising that he remains and continues to be one of the most active and respected leaders of the commercial real estate sector in Emerging Europe”.