Founder and Chairman of leading Czech real estate developer Passerinvest Group Radim Passer, received the 2017 award for Lifetime Achievement in Real Estate. The award is given each year to an individual that has made a transformative and durable impact and contribution to the New Europe property sector.

The recipient of this year’s CEEQA award for Lifetime Achievement in Real Estate was Radim Passer, Founder and Chairman of leading Czech based developer Passerinvest Group primarily associated with the innovative BB Centrum “City within a City” development. He is one of the most revered pioneers in the project of rebuilding Central & Eastern Europe post-Communism. He will attend the CEEQA Gala on 26th April to accept the award. 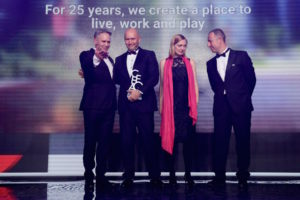 The award was sponsored by the Financial Times and is given each year to an individual that has made a transformative and durable impact and contribution to commercial real estate in New Europe across 18 national markets in Central & Eastern Europe and Southeast Europe. It is the only award to be announced in advance of the CEEQA Gala each year and the presentation of the Lifetime Achievement award is the highlight of the sector’s flagship annual gathering.

Born and educated in Communist Czechoslovakia, Radim Passer was 26 years old when the Velvet Revolution swept the country to democracy in 1989 on a tide of popular and peaceful revolt against Soviet rule. Though, by his own admission, not a model student, having seen little need to work towards the future offered by “socialist” Czechoslovakia, he was nonetheless active as a university student in pursuing “products” from the communist CMEA (Council for Mutual Economic Assistance) to people from OECD (Organization for Economic Co-operation and Development), and also a talented soccer player with professional ambitions.

Following the revolution he quit university and in 1990 found employment with a Czech-German investment company, gaining experience that enabled him to establish his own company in 1991 buying and renovating residential buildings in the centre of Prague at a time when real estate was still cheap. By 1993, with family assistance in acquiring land around Prague and purchasing a construction company in the period of privatization, the development of the landmark BB Centrum project was already under way in Prague 4, at a time when private real estate investment in commercial buildings was still a novelty and there were still few international developers and investors involved. 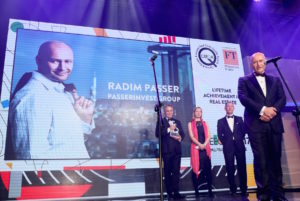 Despite the waves of international investment over the decades that followed, BB Centrum has continued to expand and innovate, holding its place as one of the most successful multi-functional developments in Prague spanning 25 hectares with 17 office and residential buildings, shops, services, restaurants and parks, children’s playground, a school building for Christian basic school, with future plans for an administrative buildings and an apart hotel, while Passerinvest has continued to hold its place as one of the most active and successful real estate developers in the Czech Republic.

A deeply religious person, Passer ensures that approximately 10% of all investments have been directed into the non-profit aspects of the project, which with time have helped shape BB Centrum’s unique atmosphere. The company is in the process of buying back buildings previously sold mainly to investment funds to the likes of Deutsche Asset Management and SachsenFonds for revitalisation.