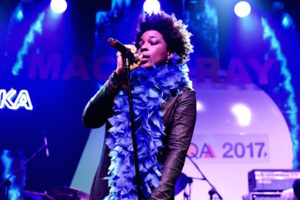 A globally renowned music and movie star, best known for her international hit single I Try taken from her multi-platinum debut album On How Life Is, Macy has released six studio albums, and received five Grammy nominations, winning one. She has appeared in a number of films, including Training Day, Spider-Man, Scary Movie 3, Lackawanna Blues, Idlewild and For Coloured Girls.

Born and raised in Ohio, Macy began singing in her 20s at the University of California and released her first album, On How Life Is, in 1999, winning a Grammy for her single, I Try. In addition to her music career, Gray launched an acting career, and appeared in the 2012 movie The Paperboy alongside Matthew McConaughey, Zac Efron and Nicole Kidman.

With a colorful career that includes multiple Grammy, Billboard, MTV and BRIT awards, and record sales of over 25 million worldwide, the integrity and innovation of Macy Gray’s artistry has allowed her to forge her own path to success and win fans and critics from all around the world. Her music transcends genres, from experimental soul and alternative rock, to retro-disco and hip-hop. However, what the accolades, awards and impressive sales figures from over the years have failed to illustrate is the depth and breadth of Macy’s artistry and vision. Her unparalleled rise to international fame and journey over the past 14 years has been an interesting one, and her latest album The Way reflects the woman and artist that she has become today.