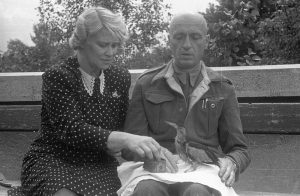 The story of personal courage, bravery and human kindness that took place within the grounds of Warsaw Zoo during World War II was captured in the 2017 movie “The Zookeeper’s Wife” starring Jessica Chastain.

The lives of more than 300 people persecuted by the Nazis and facing certain death were saved by the actions of Jan and Antonina Zabinski at enormous and constant danger to themselves and their family. Mostly Jews smuggled out of the Warsaw Ghetto with the help of underground networks, they were concealed temporarily in the basement of the zookeeper’s villa and animal enclosures around the Warsaw Zoo grounds before being provided with false documents and safe passage to escape to. The villa where they lived and harboured the fugitives still stands in the zoo grounds today.

The establishment of a foundation to commemorate the Polish couple’s legacy and the exceptional humanitarian values that drove them has been a long held ambition of surviving members of the family including their daughter Teresa who was born in the villa, their grandson Dominik, and their son Ryszard whose own courage as a young boy assisting the fugitives is fondly remembered by survivors but who recently passed away.

The foundation’s goals include the restoration and management of the villa as a fitting monument to their legacy, converting it into a museum and educational centre capturing the history and context of their actions, tracing the stories of survivors, connecting and collaborating with other humanitarian organisations to protect and project the achievements of the Zabinskis, as the wider humanitarian lessons for humanity. When asked why he and his family had placed themselves in such great danger to help so many strangers as well as people they knew, Jan Zabinski said simply because it was “the right thing to do.”

Jan & Antonina Zabinski Foundation was established, together with Zabinski family members, with the aim of commemorating the  achievements and humanitarian values.

Jan Zabinski, the zookeeper at the outbreak of the war, his wife Antonina, and their son Ryszard

and their enormous legacy and lessons for wider humanity.

purpose of the Jan & Antonina Zabinski Foundation is