This year’s award for Lifetime Achievement in Real Estate was presented to Richard Clare, Group Chairman of EC Harris for 15 years. On hand to assist with the presentation was last year’s recipient of the award, Carl Panattoni.

Richard Clare, Chairman of EC Harris for 15 years and Corporate Senior Vice President of Arcadis has been elected to receive the CEEQA award for Lifetime Achievement in Real Estate.

The award, sponsored by the Financial Times, is given each year to an inspirational industry leader who has made a significant and durable contribution to the real estate business and to the emerging Europe real estate investment sector and internationally. 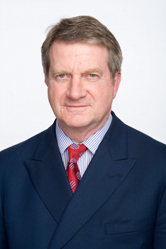 During a 30 year career with EC Harris Richard is credited with building the company’s project management capability from scratch and, as Group Chairman for 15 years, steering it to its current position as a global powerhouse in built asset consultancy with 180 equity partners employing more than 2800 people in 43 fully integrated offices located in 23 countries. Since opening its first office in Budapest in 1991 the company has played an important role in the growth of the CEE and SEE market place and participated in many of the region’s landmark real estate projects over the past 20 years, today employing 180 staff across six offices in Czech Republic, Hungary, Poland, Serbia, Slovakia and Romania, as well as in Russia.

Richard’s career at EC Harris started in 1970 when he joined as the firm’s first sponsored graduate. He was made an Equity Partner at the age of 27 and three years later co-established EC Harris Project Services Limited – a separate project management subsidiary company of which he was the Managing Director. In 1992 he was elected to the new position of EC Harris Group Chief Executive and since 1996 had combined this role with that of Group Chairman of EC Harris, leading the EC Harris transformation from traditional professional service delivery to a dynamic knowledge-based Built Asset Consultancy.

Under Richard’s Chairmanship, EC Harris has become a global built asset consultancy which works in all aspects of the built environment, including urban regeneration and large scale infrastructure projects. It is now a leading contender for major projects and asset management programmes in CEE region and throughout the world.

Richard recently managed EC Harris’ merger with Arcadis BV and in 2011 was appointed Corporate Senior Vice President at ARCADIS. In this role he represents ARCADIS NV at the highest levels in key relationships with the Company’s clients – both existing and potential – with the aim of securing or assisting existing sales teams to secure major client contracts.

On behalf of the Jury, partners, sponsors and organisers of CEEQA we toast Richard Clare’s business achievements as this year’s recipient of this award.