Prior to the announcement later this week of the award short list for the 6th annual CEE Real Estate Quality Awards, the organisers are pleased to announce that Professor Dr Werner Otto, founder and honourary Chairman of the Management Board of ECE Projektmanagement, will receive this year’s CEE Real Estate Lifetime Achievement Award.

The award, sponsored by the Financial Times, is the only one of 18 awards to be announced in advance of the the sector’s flagship awards gala on 25th February at the Warsaw Hilton Hotel. It is bestowed for significant and durable achievement in Central & Eastern European real estate and beyond.

A man of vision

Already a successful businessman, having built the internationally renowned Otto mail order business, Werner Otto founded ECE in 1965, primarily to service the growing real estate needs of his existing business in response to a series of disappointing construction contracts. 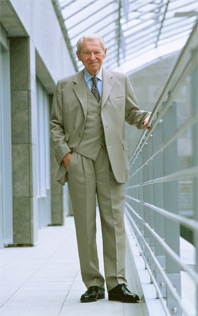 One of the pioneers in North American style shopping centres in Europe, the company has had extensive involvement in commercial real estate development of all kinds across Europe for more than 40 years, including numerous landmark buildings such as the Otto Versand administration building in Hamburg (1982), the headquarters of the Mannheimer Versicherungen insurance company in Mannheim (in cooperation with star architect Helmut Jahn, 1991), the German-Japanese Centre in Hamburg (1995), the Atrium Friedrichstraße in Berlin (1997) and the headquarters of Philips Germany in Hamburg (2006).

However the company’s reputation has been built largely on its success in developing high quality urban shopping centres, and in November 2008 the company delivered its 100th shopping centre Arkády Pankrác in Prague, which is itself nominated for the CEE Real Estate Retail Development of the Year award for 2008.

In 2000, Werner Otto’s son Alexander took over ECE and transformed the company from a Germany centered firm to a multinational corporation. Today ECE is active in Germany, Poland, Czech Republic, Hungary, Austria, Switzerland, Lithuania, Russia, Ukraine, Serbia, Romania, Bulgaria, Greece, Turkey, and Qatar. The company is today one of the largest development and construction companies in Europe.

Werner Otto has also had extensive interests beyond his business empire. He founded the Werner Otto Foundation in 1969 which assists in numerous medical causes, and the Werner Otto Institute founded in 1974, the first and, to date, the only special facility in Germany dedicated exclusively to the early diagnosis and treatment of developmentally challenged or disabled children and teenagers. He has also donated a new museum building, the Werner Otto Hall, to Harvard University, so the university could showcase the expressionist art of German-speaking artists.

He has received several awards and decorations for his entrepreneurial and social commitment, amongst others the Grand Cross 1st class of the Order of Merit of the Federal Republic of Germany, the Ehrendenkmünze [honorary commemorative medal] in Gold and the “Bürgermeister-Stolten-Medaille” of the Hamburg Senate, the honorary title “Professor of the Free and Hanseatic City of Hamburg,” the Ernst-Reuter-Medal of the Berlin Senate as well as the Konrad Adenauer Foundation’s “Social Market Economy Prize” for his entrepreneurship. He is an honorary doctor and honorary senator of the University of Hamburg as well as Laureate of the Hall of Fame in the German House of History in Bonn.

A Century of Achievement

At the age of 99, Werner Otto reaches his century this year. He has been described as a commercial pioneer and visionary who has had significant influence on the economic, socio-political and social development of Germany and beyond in the last 50 years.

His real estate company, ECE Projektmanagement, has also made a large and positive contribution to the growth of the private real estate investment sector in Central & Eastern Europe, and the opening up of retail choice following the collapse of Communism in 1989.

To recognise and honour these achievements Werner Otto’s son Alexander Otto, the current Chairman and Chief Executive of ECE, will attend this year’s CEE Quality Awards Gala to receive the Lifetime Achievement award on his behalf. We are proud that Mr Otto has agreed to accept this award.