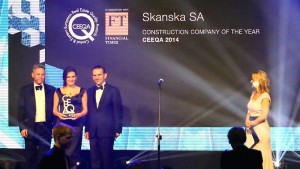 Swedish real estate developer and construction firm Skanska dominated the annual industry awards for commercial real estate in New Europe, picking up five awards for the second year running at the 11th edition of the CEEQA Gala in Warsaw, in the presence of more than 600 business leaders and senior industry professionals from more than 40 countries, as legendary entertainer Kim Wilde rolled back the years with a stunning show and young Polish star Natalia Sikora stole the limelight.

The recipient of the eleventh CEEQA award for Lifetime Achievement in Real Estate was Paul Gheysens, founder and president of leading international real estate development company Ghelamco, in recognition of his services to the real estate sector and his company’s extensive and award winning achievements in the Central & Eastern European market place. The vision of Gheysens led the company through many successes including expansion into Central Europe and Russia, as well as the recent completion of the Ghelamco Arena multi-functional stadium in Ghent which has been awarded for its interior design and was chosen from 18 competitors as the best 18 stadiums worldwide of the Year 2013.

The award is given each year to a figure who has made a significant and influential contribution to the New Europe real estate sector and beyond. For a full report on the award and Paul Gheysens’ career visit our Paul Gheysens Lifetime of Achievement page.

Skanska Commercial Development Europe scooped the awards for Developer of the Year and overall Green Leadership for the second year in succession at CEEQA 2014, as well as overall Company of the Year and company president Nicklas Lindberg took home the award for Industry Professional of the Year for, while Skanska SA were named Construction Company of the Year also for the second year in succession. The awards add to their two RealGreen Awards won at CEEQA@Mipim in March, making an unprecedented total of seven awards in one year. 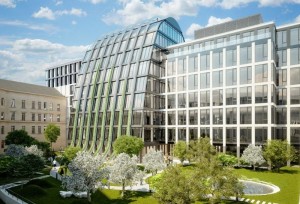 The sector’s main industry awards are for business achievement across 18 countries in Central & Eastern Europe and Southeast Europe and are organised each year to recognise business excellence and to showcase the achievements and opportunities of the New Europe real estate sector to the regional and international investment arena.

Other major company award winners on the night were Tristan Capital Partners (Investor of the Year and joint overall Company of the Year), Prologis (Industrial Developer), Helaba (Lender) and Dentons (Legal & Financial Services), Arcadis EC Harris (now Arcadis) with the award for Development Services Company of the Year for the third time in succession, ECE Projektmanagement (Property Management) and Balmain Asset Management were the first recipients of the new Rising Star Award. In the Agent Award categories JLL picked up awards for Office Agency and Capital Markets, Cushman & Wakefield was named Retail & Leisure Agency and Colliers International chipped in as they regularly do with the Industrial Agency award.

Renowned for a string of global hits including Kids in America, Keep Me Hanging On, You Came and Cambodia, legendary performer Kim Wilde lit up a night of celebration with a unique and memorable acoustic set following the gala dinner and awards ceremony that had the crowd jumping. 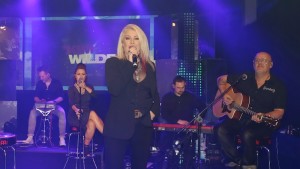 Our gratitude to this year’s jury members for their time, knowledge, expertise and patience. Comprised of senior representatives of market leading companies, places on the jury are rotated each year among developers, investors, lenders, advisors and services providers, with five major international agents operating across the region retaining permanent seats on the jury: CBRE, Colliers International, Cushman & Wakefield, JLL and Knight Frank.

Special report tie-ins to the CEEQA 2014 Gala were published by the Financial Times and WBJ Observer. The 8-page FT-CEEQA Property Special Report tie-in with CEEQA published each year on the day of the CEEQA Gala in print and online is one of the highlights of the CEEQA programme, shining a global light on the key issues, trends, companies and people of the New Europe property sector. The 2014 FT-CEEQA report focused primarily on the causes and effects of the deep pipeline in the Warsaw office market, the post-crisis recovery of the Bucharest market, and the the 2014 CEEQA Lifetime Achievement award winner Paul Gheysens.

The annual WBJ Observer-CEEQA pre-Gala report provided an in depth review of the important trends affecting the market place, including the impact of the digital revolution in real estate addressed by the 2014 CEEQA@Mipim Insight Summit. 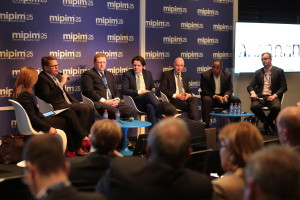 Online retail is in the foot hills of its evolution and pioneering stages of development, it is virtually impossible to imagine what it will look like 20, 30, 100 years the same way the same way we couldn’t imagine email, the internet and smart phones 30 years ago − but one thing is certain, it will need exponentially more distribution centres, and different kinds of distribution centres and storage centres to those we know today, while traditional shopping centres are going to need to adapt significantly, at significant investment outlay, to keep pace, or to survive.

So said Amazon’s EMEA Real Estate head Raymond Paetzmann, and so said a panel of international commercial real estate and retail experts at the CEEQA@Mipim Insight Summit in Cannes in March 2014. For a full report on this important insight summit visit our Digital Revolution in Real Estate page.

Full details of CEEQA 2014 award winners and short listed candidates are on the CEEQA website. Our congratulations to all award winners and our thanks to all participants, sponsors and partners for another successful CEEQA.