The organisers of the CEE Real Estate Quality Awards are honoured to welcome Mr Sándor Demján to receive the 3rd CEE Lifetime Achievement Award. This award is given to industry professionals who have made an outstanding and sustained impact on the Central & Eastern European Real Estate market. 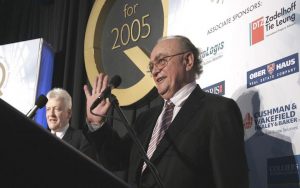 Sándor Demján is one of the founders and chairman of TriGránit Development Corporation. In 1976 he started and directed Scála, the first Hungarian co-operative department store, which later developed into a chain-store enterprise and in 1986 Mr Demján founded and became the inaugural President of the first commercial bank in Hungary, Hungarian Credit Bank. With renowned Canadian investor, the late Andrew Sarlos, he created the Central European Investment Corporation (CEIC) in co-operation with Andrew Sarlos, Ronald Lauder, Mark Palmer and Peter Munk that same year. In 1996 he founded Gránit Pólus Investment and Development Corporation; which with TrizecHahn in 1997, created the joint venture company that is today TriGránit Development Corporation.