Eugene Golub, founder and chairman of Chicago-based Golub & Company, has been chosen by the organisers of the first Central & Eastern European Real Estate Quality Awards in consultation with jury members and senior representatives of the real estate industry to receive a special award for Lifetime Achievement for his services to the industry in the region. 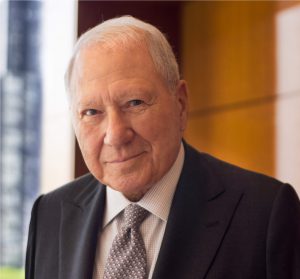 Mr Golub has since 1960 been instrumental in more than $2 billion of real estate transactions in the USA and Europe, and has developed, owned or operated in excess of 25,000,000 square feet of office, residential and mixed-use properties. He was a pioneer in private real estate investment and development in the former Eastern Bloc, introducing the concept; an unknown process in the communist states to government agencies and potential local investors. In 1989 Golub & Company affiliate Golub-Europe became the first major American real estate company to complete a development in the region with the Warsaw Corporate Center.

The successor company to Golub-Europe, GE Capital Golub Europe, has since conducted more than $400 million of transactions in the region, developing a string of landmark office and mixed-use buildings including the Warsaw Financial Center, the Atrium building in St. Petersburg, and the Charles Square Center in Prague; the most recent of which; the International Business Center in Warsaw, it itself short-listed for this years’ CEE Office Development of the Year award.

Mr Golub’s experiences in the region serve as the backdrop for his recent novel, Protokol, a political thriller set in Warsaw and Moscow; which has received wide acclaim.

We are delighted that Mr Golub has accepted to attend the event this inaugural event to receive this much deserved award; which we hope will set the standard for this special award in the future.