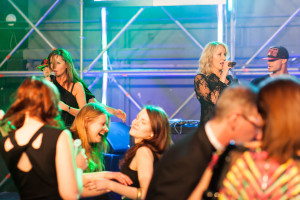 More than 600 guests attended the tenth edition of the CEEQA Gala Dinner & Awards Ceremony at SOHO Factory in Warsaw, the tenth anniversary of the event. As guests arrived for the event they were treated to a live performance by Manila based young dub-violinist Bryson Andres flown over especially for the occasion, as well as a range of charity activities including human one-arm bandits, a floating shark and an exhibition of Ten Years of CEEQA including a Brief History of Praga, the new location for the event. However it was two unforgettable live performances that left an indelible mark on this history of CEEQA, by global chart toppers Bananarama in the after party, and by elite Polish entertainers Edyta Gorniak and Adam Sztaba. 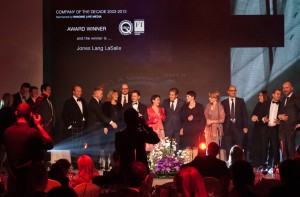 A total of 22 awards were presented for business excellence in New Europe real estate during the previous calendar year. International consultants Jones Lang LaSalle (now JLL) shone most brightly with a hat-trick of awards including the tenth anniversary Company of the Decade 2003-2013 award voted electronically by guests at the event. But Skanska were the night’s biggest winners, also picking up three awards but bringing their annual haul to an unprecedented five awards, including the two RealGreen Awards presented at the 2013 edition of CEEQA@Mipim in March.

Done too much, much too young 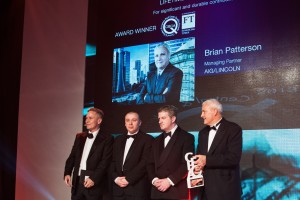 The year’s highlight award for Lifetime Achievement in Real Estate was presented to Brian Patterson. In Poland since 1992, he became a founding partner of AIG/Lincoln, a joint venture with American International Group and Lincoln Property Company. AIG/Lincoln, through local partners in each market, has successfully developed and managed projects in Poland, Russia, Czech Republic, Hungary, Romania, Slovakia, Germany, Italy, Bulgaria and Spain. For more information visit our Brian Patterson Lifetime Achievement page.

Other major award winners on the night included Pawel Debowski with the Industry Professional of the Year award, with his firm Dentons also winning the Legal & Financial Consulting Firm award, either side of a unique and magnificent live performance by Poland’s outstanding female vocalist in a generation, Edyta Gorniak, accompanied by renowned Polish composer Adam Sztaba.

Prior to the Gala in March, the year’s four RealGreen awards for green building were presented at the CEEQA@Mipim New Europe Breakfast. CEEQA@Mipim provides an important focal point for the sector at the Mipim global real estate fair in Cannes, more than 200 guests attended the 2013 edition of the event.

The anniversary party following the awards dinner had guests rocking the warehouse to live shows by eighties global chart-toppers Bananarama, with Polish DJ due Wet Fingers and local talent DJ Dred kept the audience rocking into the night. A superb four-course dinner was prepared by leading Warsaw restaurant The Belvedere. The awards ceremony was serenaded by Wroclaw based Dziubek Band and resident pianist Albert Kurowski.

Bringing their own brand of fund to fundraising activities on the night, Central European charity Bator Tabor foundation organised numerous activities including air shark racing and a human one-arm bandit, as well as a charity auction and a raffle. Guests this year raised 12.000 euros for the foundation. 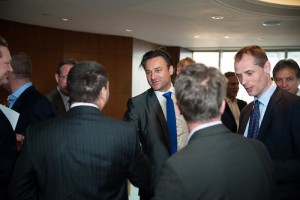 A group of 44 senior representatives of market leading companies comprised the 2013 CEEQA Jury. The final award selections were made at a meeting of the jury the night preceding the CEEQA Gala and was followed by a CEEQA 2003-2013 Jury & Partners Luncheon on the day of the gala.

Vital to CEEQA’s role and place in the market is the composition and function of the CEEQA Jury. Our gratitude to this year’s jury members for their time, knowledge, expertise and patience. Comprised of senior representatives of market leading companies, places on the jury are rotated each year among developers, investors, lenders, advisors and services providers, with five major international agents operating across the region retaining permanent seats on the jury: CBRE, Colliers International, Cushman & Wakefield, JLL and Knight Frank. 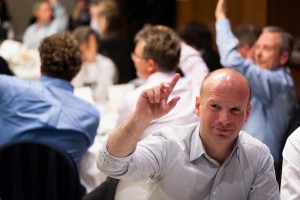 Insight Summit – Back to the future, the next ten years

More than 100 industry professionals gathered to hear the views of some of the sector’s most respected business leaders on the future dimensions, prospects and opportunities of the New Europe real estate sector over the coming decade, with the global economic crisis now receding into the background, in the main conference auditorium at Mipim 2013.

For a full report visit our Back to the Future Insight Summit page.

An eight page FT-CEEQA Property Special Report tie-in with CEEQA was published by the Financial Times on the day of the Gala in print and online, one of the highlights of the CEEQA programme, shining a global light on the key issues, trends, companies and people of the New Europe property sector. The report looked at the increasing push into regional cities in the more mature Central Europe markets, both because of core city saturation in some segments and as a result of burgeoning BPO activity, as well as the emergence of the Romanian market as a serious investment target, and the recent re-emergence of Hungary – despite the backdrop of market unease about Ukraine situation and the economic effects of international sanctions against Russia.

The annual WBJ Observer-CEEQA pre-Gala 20 page report provided an in depth review of the important trends affecting the market place addressed by CEEQA’s two insight summits at the recent Mapic and Mipim real estate fairs, as well as a round of past CEEQA Galas and plans for 2015.

Finally we say a big thank you to all our commercial, media and operational partners. In the genesis of CEEQA over the past dozen years to its role and place in the market today we have come to work with some of the best service providers in the region and most important sector and international business media platforms, which have been vital to the growth and success of CEEQA. We also owe a huge debt of thanks to our many commercial partners and customers at all levels whose participation and constructive contribution in sharing of our strategic vision makes possible all the value and enjoyment CEEQA provides to the market place today.