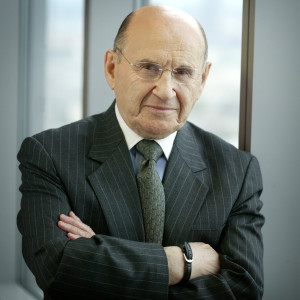 Celebrating the heroes of the sector over time, as well as today’s market leaders, is central to CEEQA’s role and mission. Few can lay greater claim to the title of sector hero than David Mitzner.

Already a past winner in 2005 of CEEQA’s garland Lifetime Achievement Award given each year to important figures recognised across the sector for notable and durable contribution to the rebuilding of Central & Eastern Europe post-communism, David reached another important milestone on the eve of the 2015 CEEQA Gala when he turned 100 years old.

In a live video link-up to the event from his office in Houston where he still works every day, following a characteristically rousing speech, Gala guests paid tribute to David’s extraordinary achievements on both sides of the Atlantic and presented him with a unique Double Lifetime Achievement award sponsored by the Financial Times. Many of you reading this will know David, or know of David, or have actually worked with him. Some of you will have worked out with him even, when he was still to be found at the crack of dawn each morning at the Warsaw Marriott gym before putting in a full day’s work. In his nineties.

Many of you will also recall his vigorous, defiant and uplifting speech in accepting his Lifetime Achievement in Real Estate award in 2005, as well as his equally fiery handover speech when Eli Alroy of GTC accepted the same award in 2010. 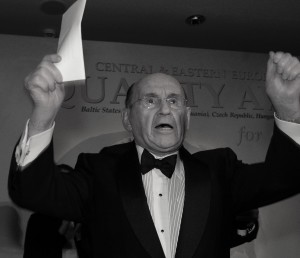 For those of you who don’t know David, you will probably know the Warsaw Trade Tower, built on the edge of the Warsaw Jewish Ghetto where many of his family died during WWII, and where he was born and raised. After setting up a joint venture with Apollo Real Estate Advisors as they were then known, he bought it in 2002 – at that time the tallest building in Central Europe. It was completely empty, the concept of private commercial real estate investment, indeed the notion of private corporate tenants, was still in its relative infancy.

This was just one of a tranche of investment deals and developments he undertook as he sought not just to make money, but to help rebuild his country and his city after the protracted shock of communism, not to mention the total decimation of Warsaw in 1944. Landmark projects he developed and invested in over the period include Ericsson Center, Par Tower, Renaissance Tower and the early modern warehouses outside Warsaw, Zeran Park. But in 2004 he shocked the market with an outlandishly outsized deal, capturing the Metro anchored retail portfolio in the largest real estate acquisition in Central Europe’s history, at close to $1 billion. It seems a very large deal today, at the time it was simply out of this world. 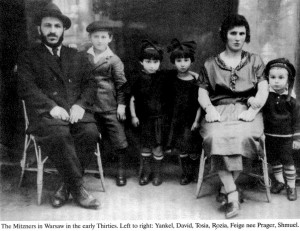 Rewind some 70 years, David was working in his father Yankel Mitzner’s business in Lviv, now in eastern Ukraine but then called Lwow and part of Poland, when Poland was invaded in 1939. They were immediately separated from their family back in Warsaw, in ul. Gesia (Goose Street), now ul. Anielewicza, half way al. Jana Pawla II. Directly opposite where the Goose Street Prison and concentration camp were established.

Undeterred, hearing about the increasing hardship for Jews in Warsaw, David set about establishing a smuggling operation to help keep his family alive. Not, as you might expect (if you can expect anyone to be taking on such a challenge in those dark days), smuggling things into Warsaw; no, he established a network of peasants and farmers from Warsaw to the border to fetch better prices for his family’s goods on the Russian side of the divide than they could achieve in Warsaw. Taking his life in his hands, literally. 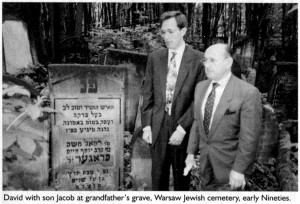 Thankfully, he was captured by the Russians and not the Nazis. Ironically, he was accused of spying for the Nazis and sent to a Gulag in Siberia, where he somehow managed to stay alive before being released in 1947. Returning to Warsaw he found nothing left of his family, there was nothing left of his home and his community apart from rubble, his father had also died of malaria on the Russian side of the divide. Being unaware then of what he was to discover some years later, that his sister Rozia had survived the Majdanek concentration camp in Lublin, he managed to escape the now communist Poland by stowing away on a cargo vessel to Sweden, eventually making his way to meet up with relatives living in Canada. 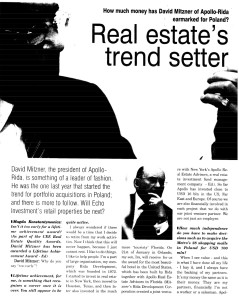 From there the story is less tortuous. With the help of an uncle he bought into a partnership in a hosiery company in New York, struck out on his own selling machinery and fabrics to hosiery companies, found an exciting market for Asian fabrics in Texas serving the Mexican market, built a shopping center in Houston, got into resorts in cahoots with Apollo, got a taste for buying real estate (and holding it), built a substantial corporation. And then the Berlin Wall came down.

Few people, perhaps no one, put this sector on the international investment map more than David and Rida Corporation did, with such passion, expertise and courage. The company is now run by his son Ira along with other members of David’s family, with Rafal Nowicki running its European operations from Warsaw. But David still goes to work, every day.

Lori Orosan
H&M Hennes & Mauritz
Dear Mr Mitzner,
Happy Birthday! We wish you many more healthy and successful years to come!
Thank you for such example, for such success story. We are happy to be partners and we can express only positive thoughts on the way your team is representing you.
Sto lat!

Bernhard Mayer
Centrice (ex CEO of Europolis)
I was on the event and panel when you were granted with the achieved by unabashed entrepreneurship.
Congratulations!

Richard Keen
Keen Property Partners
I would like to wish you a very heppy 100th bithday.
A full hearty Mazeltov to you on this amazing milestone.
You have set yet another benchmark.
Congratulations.

Eugene Golub
Golub and Company
When I grow up I want to be like you! Now that I am 84 you my sincere best wishes for many more healthy and happy birthday celebrations.

Eli Alroy
ex Chairman of GTC
Dearest David,
It’s a big honor for me, to congratulate you for your very special birthday. In this very special occasion, I salute to you for your phenomenal vision, professionalism and execution abilities. You personally changed the real estate land scape of Poland . You set new standards for generations. David you are the jewel of the crown of the polish real estate for many years to come.

Kresimir Spoljar
Woodsford Grupa (ex TISHMAN)
Meeting you regularly at the Marriott Hotel in Warsaw and  knowing you personally and your son Ira during my Warsaw rs (2002 – 2005)   as a Direct pleasure to congratulate you on this fantastic lifetime achievement. I remember the stories we shared during our breakfast meetings at the Marriot. You have always been an inspiration! Congratulations again on this incredible anniversary with best wishes for nothing but health, happiness and another STO LAT!
Kres

Brian Burrough
Primmo
Congratulations on a life well lived and being an integral part of Poland’s revival!

Garry Oliver & Kamila Rybicka
Fundacja Dziecieca Fantazja
Dear Mr. Mitzner
Please accept our heartfelt congratulations on your 100th you have made to countless others are treasured gifts.
We salute you!

Jacek Kowalski
STRABAG Sp. z o.o.
Dear Mr Mitzner,
On this special occasion please accept from all employees of  work and how to be a good man.

Brian Burgess
Savills
Congratulations on your personal landmark, to add to themarket.
I recall our regular meetings in the 1990s and I could sense positive and lasting. You succeeded!

Monika A Debska-Pastakia
Knight Frank
Wishing you a wonderful Birthday and many happy returns.
Kindest regards

Soren Rodian Olsen
Cushman & Wakefield
Dear Mr Mitzner,
My warmest congratulations and Sto Lat! It is more than 10 d Rafał the first time when trying to move Bank BPH – my then-employer – into Warsaw Trade Tower. I failed but have never lost my admiration for your achievements, personally and professionally.
Yours sincerely.

Greetings and congratulations on reaching your centenary David, your greatest achievement yet! Wishing you another 100 years of health and success, and thanks for all you have given. Sto lat!