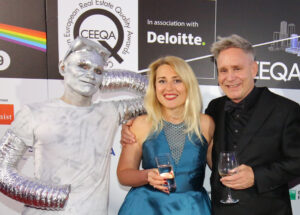 The biggest news of the return of CEEQA is the announcement of a new face, Svetlana Fedosova.

Following a successful five years with GRI Club (Global Real Estate Institute) leading its activities in the CEE sector, Svetlana has joined CEEQA as equity partner and CEO to work alongside its founder, Richard Hallward. The partnership between the sector’s two most influential market insight and live media figures has already been described as the “dream team” for both the reboot and future direction of CEEQA. Svetlana officially joins CEEQA as of 01 October 2022.

“I’m thrilled to be part of this challenge to bring CEEQA back, and the opportunity to take it forward into the future, to the benefit of the sector and its market players. GRI and CEEQA have been close partners for many years and I have seen close up the quality of the platform and high esteem with which it is held across the sector, and I’m fully aware how much it has been missed. This couldn’t be a better life as well as business opportunity for me, and I greatly look forward to it.”

Richard Hallward, founder of CEEQA, who moves to the role of Chairman and will remain as director of magic, said:

“If I’m open honest, which people know me to be, the path forward from here was not something I could see clearly and with energy following a professionally and personally testing pandemic, the arrival of Svetlana changes the picture completely. As someone I trust and respect hugely, who is known, trusted and respected by market leaders across the sector and has a good grasp of the sector’s intimate details as well as its place in the wider European and global market place, and who knows how to put a top drawer event on, it’s as no-brainer as it gets.”